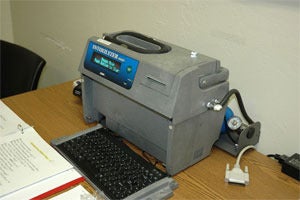 The Intoxilyzer 8000 made by CMI is was the primary tool used by Tucson Police Department for chemical analysis in DUI cases until recently.  Its use has been phased out.  Tucson Police have shifted to wider use of blood testing.  Additionally, they are using the newer Intoxilyzer 9000.

While based upon the same concept as the Intoxilyzer 5000, the technology within the box is new. The Intoxilyzer 5000 employs a rotating filter wheel to assist it in identifying alcohol quantities in breath. The 8000, in comparison, is entirely solid state with no moving parts. In theory this is supposed to make the device more reliable, however, the 8000 has not been in service long enough for experts to assess its durability.

Many in the Tucson / Pima County defense bar believe the Tucson Police Department refused to use the newer models because they wanted to deny the defense bar the wealth of diagnostic information stored within the machine memory.

Tucson Police Department discontinued use of the Intoxilyzer 5000 years ago.

Or fill out the form to contact us by email.

Thank you for contacting us. We'll get back to you shortly.

Please complete all required fields below.

Focused On Your Case

We understand that a DUI charge is like a dark cloud looming above you. We work together to make sure that you not only get a great resolution to your case, but that you also know that you are well taken care of every step of the way.